Real Wedding: Marika and James’ Race to the Marquis Part 1

Sometimes a wedding comes along that just has so many gorgeous pics we can’t fit it all into one day. This wedding is one of those. For part one we’re sharing the wedding of Marika and James who got married in May at the Marquis of Alkham. Here Marika tells us about the planning of their big day.

“We searched for a long time to find the right venue. We found the Marquis restaurant in a cookery magazine, having no idea there was such a highly acclaimed restaurant so close to where we lived. As soon as we drove down the beautiful country road, we were hopeful and when we arrived, walked inside and were warmly greeted by Hannah Walton saying “sorry I don’t have a brochure made up, we don’t really churn out weddings…” we were sold! The more we saw, the more we loved it. It just felt right, we wanted somewhere really special for our 39 guests. Hannah is the wedding co-ordinator at the Marquis and without her help, all of our ideas would not have been able to become a fantastic reality. We had so much fun and we regard her as a friend now. 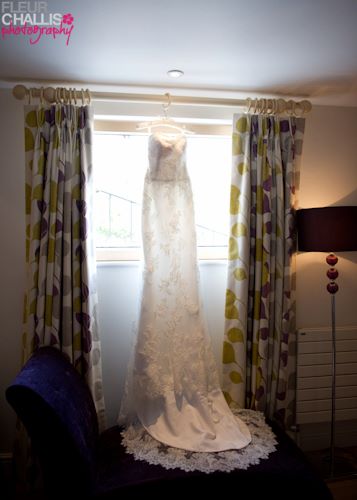 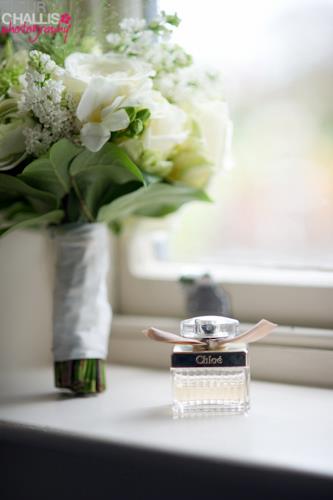 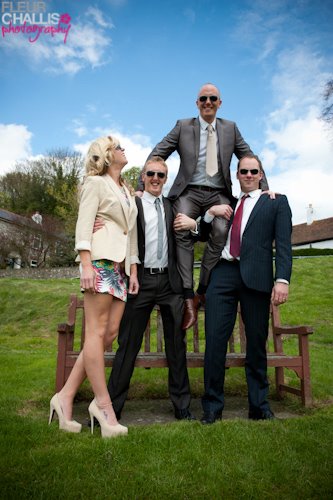 Sarah Kay, a friend’s sister, does floristry part-time. My bouquet was rustic and contemporary, with white lilacs, thistles, ranunculus roses, freesias, green hydrangeas and Columbian roses, which came through in my hair, the bridesmaid’s hair and the button holes as well.

I always wanted white lilacs as they hold fond childhood memories for me, hiding under a giant lilac tree in our front garden in Ireland. I love ranunculus roses and hydrangeas as well, this is one of the reasons I convinced James that May was a great time to get married. I had always imagined wedding photos in a bluebell wood. 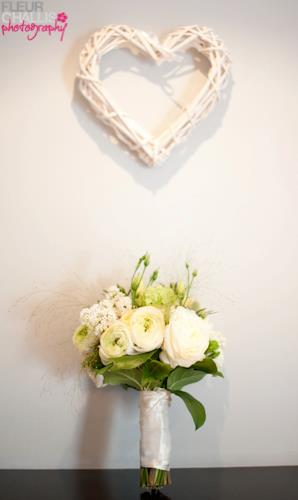 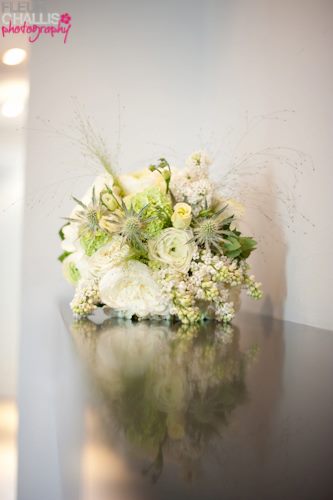 I bought my dress from Signature Brides in Hythe and it was a beautiful lace strapless dress from Tia by Benjamin Roberts. I tried on many shapes and styles and had more or less chosen one. I tried on a few more and am so glad I did because that’s when I came across the Benjamin Roberts dress. I loved the simple style dress with the delicate lace detail – it made it so special. As soon as I tried it on, I walked out of the fitting room and said “uh oh, I am in a bit of a pickle now!” as the dress was more than I had anticipated in the budget, but it was worth it!

The shoes I wore were from Next for just £35. I bought two pairs and decided just before walking up the aisle which ones to wear! I had some very simple freshwater pearl earrings from eBay and a Columbian ivory rose in the side of my hair. My make up was by Emma Smisson at Bridal Beauty.

My sister was my bridesmaid and her dress was from Coast.

James bought his suit from Ventura at Moss Bros. It was a brown/copper shade and he just chose what he felt most comfortable in. 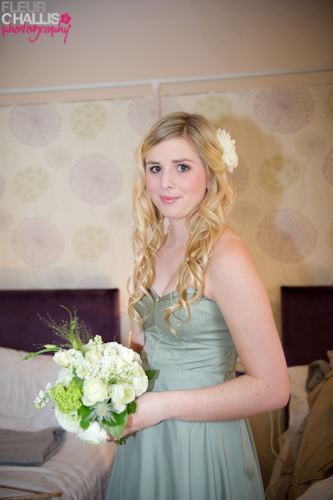 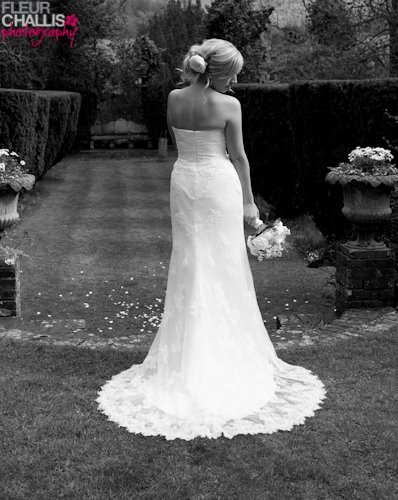 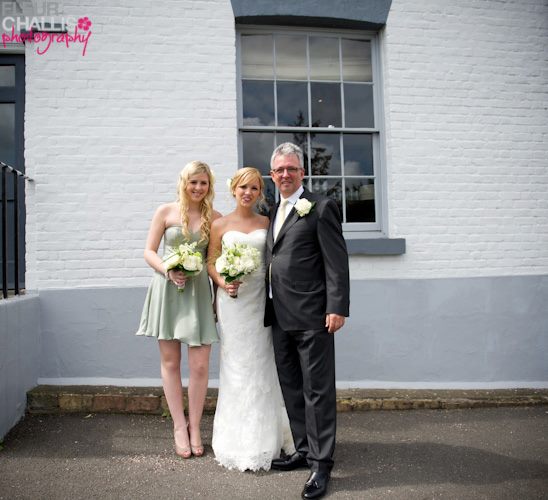 We had a civil ceremony. We decided not to personalise vows because we have been together long enough for people to know how in love we are and no need to gush about it! We chose a reading called “the Art of a Good Marriage” that my childhood friend read wonderfully and it epitomized what we feel strongly about in our relationship that would carry through into our marriage.

We had a slideshow with the signing of the register during the ceremony. It was full of photos from when we were children, our first date, our holidays, our 10 year anniversary and pre wed shoot. If there wasn’t a dry eye after the ceremony, there certainly wasn’t after the photos which were accompanied with some sentimental songs. We then played an extended version of this throughout the evening by the bar for people to quietly sit and watch if their feet needed a rest from dancing. 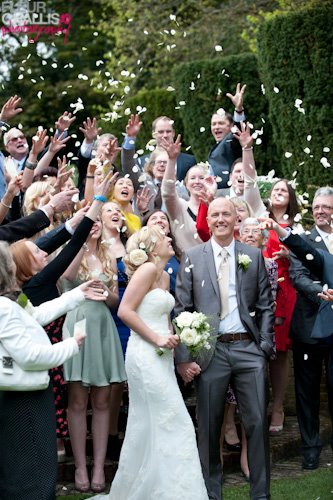 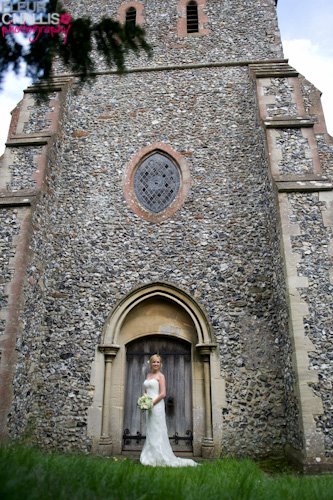 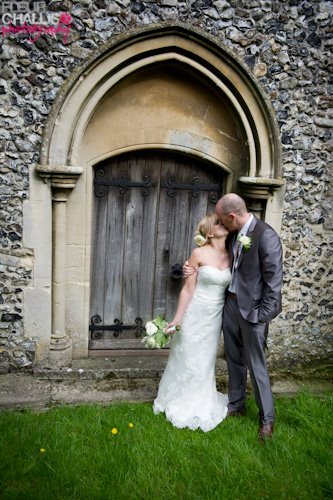 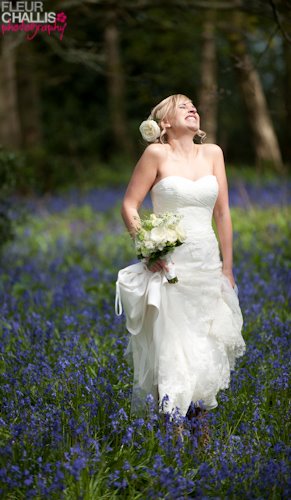 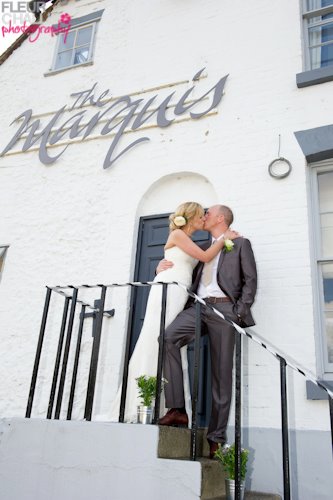 After the ceremony we had photos in the church gardens and then everyone went down to the terrace for drinks, canapés and garden games which was a lot of fun.

We wanted to make sure that our guests got to meet everyone so we mixed the tables up for dinner and had a sharing menu. The starter was a ‘Kentish Antipasto’ which consisted of poached asparagus, rabbit rillette, pickled light Sussex eggs, cured beef, cheddar fondue and homemade bread sticks and chutney. The main course was a ‘Sunday Roast’ of beef topside, Yorkshire pudding with confit shallots, herb roast potatoes, crispy flank and watercress salad and seasonal vegetables. The feast was rounded off with a dessert of chocolate fondue, served with marshmallows, flapjack and tropical fruit. It was all washed down with Tenterden sparkling wine, a lot of gin and tonic and a tab behind the bar, which all the guests were very grateful for!

As place cards we had photos of each guest and put these through an app to create individual effects and then printed them out as Polaroid photos which everyone loved.James had three best men, his best friend, his brother and his oldest friend. All of them were asked to give a speech as we moved around after each course. We had so many comments about what a highlight that was and the speeches never got boring because they were all so varied! Rather than a traditional guest book, we had cards and marker pens and passed these around for everyone to leave messages on so that we could put our own book together and enjoy doing that afterwards. 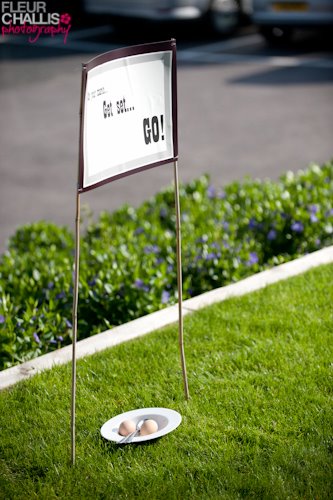 At the reception we had white lilacs, ranunculus roses, lisianthus, eringium, pannicum, Columbian garden roses, avalanche roses, viburnum opulus and freesia’s. The flowers were placed either side of the altar and as centerpieces for the reception, where the arrangements were in small square glass vases that were spread out along the tables. It looked really beautiful! 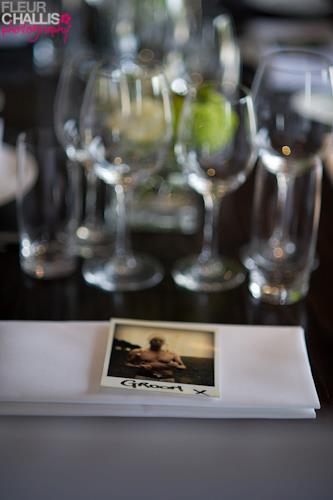 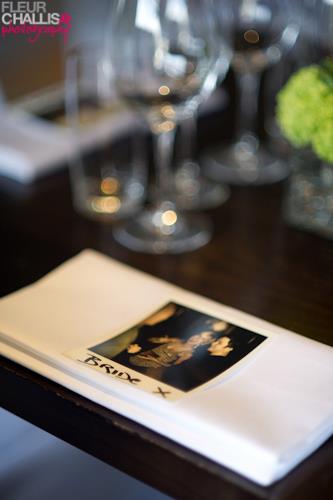 In the evening we served mini bacon sandwiches and cheeseboards as well as a sweet table where guests could take home sweets in little Chinese takeaway boxes that we put pretty green ribbons on. James made the 7 tier cupcake tower which consisted of small and large cakes, which were all flavours of cocktail. The guests could choose from Strawberry Daquiri, Limoncello or Mojito. They were such a hit and looked fab next to the sweet buffet. There was also a traditional 2 tier fruit cake that the Marquis supplied in their package, for which we provided 2 cake toppers for. 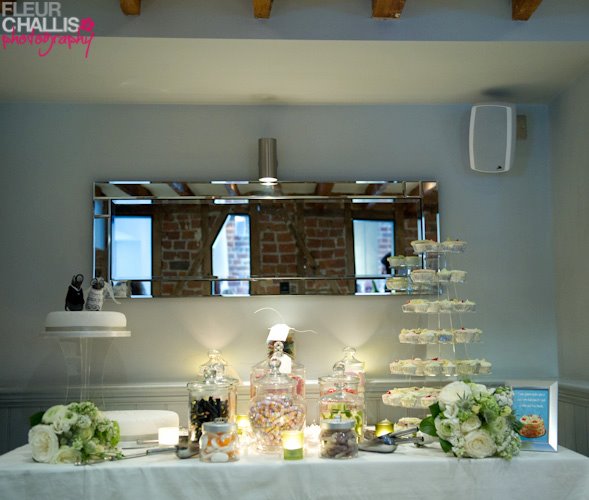 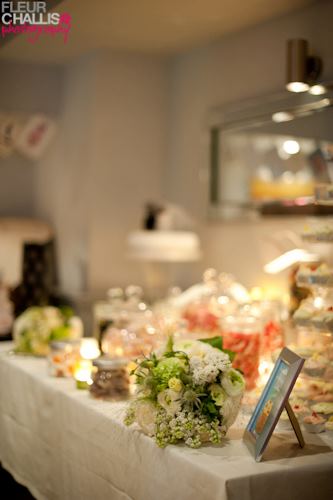 For our first dance, we had a friend mix two records together. We chose Shania Twain’s ‘you’re still the one’ because it was very cheesy but the lyrics were also quite symbolic. It then went into a rendition of Sir Mix A Lot’s ‘Jump on It’ and the dance moves from the iconic ‘Fresh Prince of Bel Air’ scene which seemed to go down with a lot of laughter! We then had a DJ from Discologic.

My mum presented us with a blank canvas that had one of the wedding invite pictures on it and all the guests took turns in signing it and leaving messages.

Fleur Challis and her husband Kevin were our wonderful photographers . We met Fleur through Hannah at the Marquis and we fell in love with her charm and lovely personality. She was so enthusiastic and excited, which made it a lot of fun to work with her. We met Kevin at the pre wedding shoot, and he was great fun as well. To have them both was such a treat and it brought a wonderful balance of posed photos as well as candid photos which captured the day perfectly. As they always say, a picture tells a 1000 words and the couple really did achieve everything we had hoped for. Photography is a big part of our lives and Fleur and Kevin really understood this and the essence of fun, happiness and love that comes through the photos is spot on!

Marika’s final words of advice as “don’t get too caught up in the day itself and remember that it is a celebration of the time you have spent together and the times you have ahead of you, it should be fun! Stay true to yourselves and what is important to you”.

Thanks to Marika and James for sharing their day with us and big congratulations to you both. Watch out for Part 2 when we’ll be sharing their photo booth shots.

2 Responses to “Real Wedding: Marika and James’ Race to the Marquis Part 1”